1. Electricity is the set of physical phenomena associated with the presence and flow of electric charge.

2. Electrons have a negative charge.

3. An Electric (force) field surrounds any charged object – it spreads out – weakens with distance.

4. The charge is measured in Coulombs.

6. In a good conductor, the valence electrons can be easily forced to move from one atom to the next.

7. A conductor is a material that has a large number of free electrons that continually jump to other atoms.

8. Good electrical conductors are copper and aluminum. Gold, silver, and platinum are also good conductors but are very expensive.

9. An insulator is a material that has only a few free electrons. In insulators, the electrons are tightly bound by the nucleus.

11. Current (I) is the movement of charge through a conductor. Electrons carry the charge.

12. Unit of measurement current in Amperes (A).

13. The fundamental electric quantity is Charge.

14. Current is the rate of flow of negatively-charged particles, called electrons, through a predetermined cross-sectional area in a conductor.

15. Resistance – The ability to resist current leakage through and over the surface of the material.

16. The resistance, expressed in ohms ( named after George ohm) 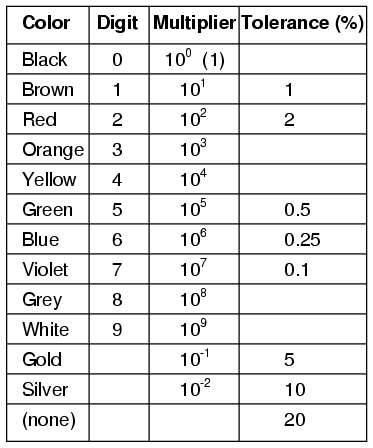 18. An ammeter is used to measure the amount of current.

19. A voltmeter is used to measure the potential difference between two points.

20. An instrument used to measure resistance is Ohm meter.

21. A capacitor is an energy storage element.

22. It can store electrical voltage for periods of time.

23. A Capacitor consists of two conducting metal plates with an insulating sheet of material in between.

24. When a capacitor has a difference in voltage across its plate, it is said to be charged.

25. Unit of capacitance is Farad

26. Inductance (L) is the property of an electrical circuit that opposes the change in current.

27. An inductor is a passive energy storage element that stores energy in the form of a magnetic field.

28. The henry (symbolized H) is the Standard International ( SI ) unit of inductance.

30. When current flows through a conductor, heat energy is generated in the conductor.

31. The heating effect of an electric current depends on resistance, amount of current, and time for which current flows.

33. The magnetic field carries the invisible force of magnetism

34. Wherever an electric current exists, a magnetic field also exists.

35. Whenever current flows through a conductor, a magnetic field is created around the conductor.

36. The rule for remembering the direction of the magnetic field around a conductor is called the right–hand clasp

38. An electromagnet is a type of magnet in which the magnetic field is produced by an electric current.

39. In electromagnets, the magnetic field disappears when the current is turned off.

41. Electromagnetic Induction creates a voltage or current in a conductor when a magnetic field change.

42. In a transformer, alternating current in one winding induces a changing magnetic field in the transformer core

43. Transformer work on the principle of Electromagnetic induction.

44. In Generator magnetic field of the rotor induces a voltage in the stator windings.

46. Dynamo works on the basis of Faraday’s law.

47. Whenever a magnetic field is moved past a conductor a voltage is induced in the conductor.

48. Farad determined that a capacitor has a value of one farad of capacitance if one volt of the potential difference applied across its plates moved one coulomb of electrons from one plate to the other.

49. Electric bell functions by means of an electromagnet.

50. Lenz’s law states that the polarity of the induced emf is such that it tends to produce a current which opposes the change in magnetic flux that produces it.

51. When the current in a coil changes, it induces a back emf in the same coil.

52. The magnitude of the induced emf in a circuit is equal to the time rate of change of magnetic flux through the circuit.

53. The induced emf can be increased by increasing the number of turns N of a closed coil.

54. By accelerating magnet inside a coil, current in it increases.

55. A total number of magnetic field lines passing through an area is called magnetic flux.

56. The magnitude of induced e.m.f is proportional to the rate of change of magnetic flux linkage.

57. In a transformer, the core is made up of soft iron in order to pass maximum magnetic flux.

58. Currents that flow in circles inside a disc are known as eddy currents.

59. When the field is parallel to the plane of area, the magnetic flux through the coil is zero.

60. An open coil has infinite resistance and zero inductance.

61. In the case of inductance, the current is proportional to the magnetic field.

62. For a purely inductive circuit, the Actual power of the circuit is zero.

63. Lenz’s law is a consequence of the law of conservation of energy.

64. The coefficient of coupling between two air core coils depends on mutual inductance and self-inductance of two coils.

65. A crack in the magnetic path of an inductor will result in reduced inductance.

66. The inductance will oppose the change in circuit current.

67. Weber is the unit of magnetic flux.

68. C cannot be used for magnetizing and electroplating.

69. Inductors act as a short circuit for DC.

70. Long-distance transmission is easy for AC.

71. When the motor is at its maximum speed then back emf will be maximum

72. The reluctance in a magnetic material is a property by virtue of which it opposes the creation of Magnetic flux.

73. Coulomb’s First Law states that unlike poles attract each other and like poles repel each other.

75. In electroplating, the solution must be of salt of the metal to electroplate with.

78. When an electric current is passed through a bulb, the bulb gives light because of the heating effect of current.

79. The process of producing chemical decomposition of a compound by passing electricity through the compound is called electrolysis

80. The filament used in an electric heater is of high resistance.

82. Conversion of temperature into electric voltage is done with thermistor

83. Wire wound variable resistance is known as a rheostat

84. The potential difference between ends of conductor maintained by the battery is

87. Filament bulbs are best examples of the non-ohmic devices

88. Reciprocal of resistance is called conductance

89. A living creature that turns itself into living battery is eel

90. The characteristic specific resistance of a wire is its resistivity

92. To pass current through ammeter it should be connected in series in the circuit.

93. Inside a hollow conducting sphere electric field is zero.

94. To obtain a high value of capacitance, the permittivity of the dielectric medium should be high.

96. The bulb in street lighting are connected in parallel.

97. The third pin of a 3-pin plug is thicker and longer for protection purposes.

98. Our household apparatus are connected in parallel

99. The internal resistance of an ideal voltage source is zero

100. The internal resistance of an ideal current source is infinity

Android
Franchise
Work with us
Join / Inquire us
Ticket Support

Don't miss a bit from us