The Staff Selection Commission (SSC) is likely to review the skill test conducted for the recruitment of Stenographer Grade C and D. The Commission has released a notification in this regard on the official website.

As per the Official Notice, the commission had received a huge number of complaints relating to the evaluation of Skill Test for Stenographer Grade C and D Recruitment inducing the exam body to re-check the evaluation.

The Commission has stated that it will go through the skill test evaluation again and is expected to release the revised skill test result for the Recruitment of Stenographer on December 28.

The results would be available on the official website post-declaration.

SSC had released the list of candidates who were declared successful in the SSC Steno 2017 Skill Test on November 28, 2018, followed by an additional list of qualified candidates on December 10, 2018.

Step 2: Click on the result link and open the SSC Stenographer Result page.

Step 3: Search the SSC Stenographer Result link and open it.

Step 4: Fill the Roll No and DOB in the provided check boxes and hit the submit key.

Step 5: The result will appear on your system screen. 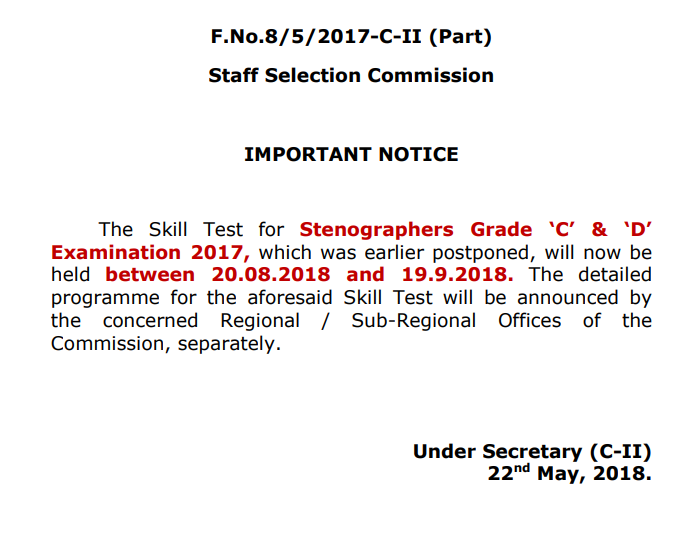 Skill Test of the SSC Stenographer Recruitment has been rescheduled to be conducted between 20th August and 19th September. The Staff Selection Commission (SSC) has released a notice for the same citing the above-mentioned dates.

SSC had organized the written examination for SSC Stenographer Group C and D Recruitment in September , last year. A total of 2,24,618 candidates had appeared for the same.

The provisionally qualified candidates have been eyeing on the concerned Regional/Sub-Regional SSC websites to know the Skill Test schedule as and when it is released. Meanwhile, SSC officially announced the SSC Stenographer Skill Test 2017 Official Dates. The official Notification has been provided below.

No Interview for TNPSC Group 2 Exam