Chief Minister of Tamil Nadu has announced in the assembly meeting about the decision of TNPSC (Tamil Nadu Public Service Commission) to increase Upper Age Limit for TNPSC GROUP 1, GROUP 1-A, GROUP 1-B exams.

According to the announcements which were made under the Rule 110 by Chief Minister of Tamil Nadu which had more focus on the Education Department, the age limit for the TNPSC exams were increased.

Aspirants can check the Official press release from the Tamil Nadu State Government from the link that is provided below. 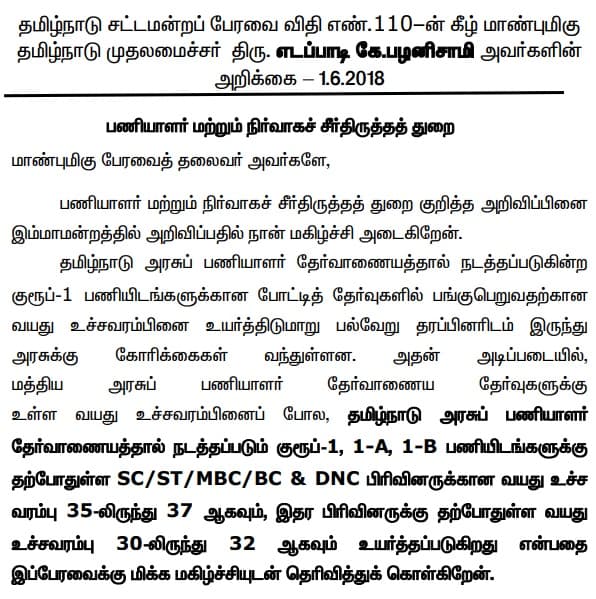 Being a Pioneer coaching Institute for TNPSC Exams, RACE Institute is taking his announcement a Good sign for such candidates who are seriously taking up the TNPSC Examination due to age restrictions.

It is great news for the candidates who are making their last attempt in Group I, Group I-A, Group I-B Examinations.

For those of us, preparing for the TNPSC Group 1 Examinations, RACE Institute provides a huge result and could make you one in the testimonials.

Want to crack TNPSC Group 1 Exam in this year?

Android
Franchise
Work with us
Join / Inquire us
Ticket Support

Don't miss a bit from us