RACING TOWARDS EXCELLENCE IN COMPETITIVE EXAMS 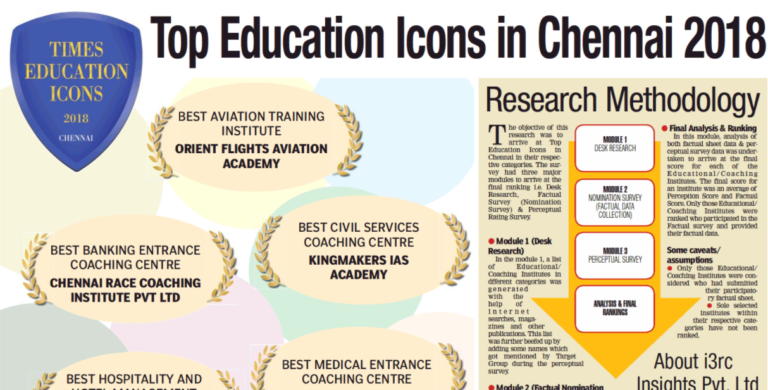 In which, our Chennai RACE Coaching Institute has been selected under BEST BANK ENTRANCE COACHING CENTRE category. We are very proud to receive this honor from the Times of India.

Times also released an article about our Institution, as follows;

RACE, not only in the name but also in the results they have proven. RACE filled 62% of the total vacancies in Tamil Nadu in IBPS RRB Officer (IBPS RRB PO) exam which the result released two weeks ago. Other than this, there are 20 students in the waiting list. There are plenty more students got placement order from various banks since 2012.

Not only in the Banking sector, RACE has created CBI Sub Inspector, Tax audit officer and many Central Govt officers through Staff Selection Commission. RACE has produced 6989 Results in Bank and SSC exams in 2017. RACE is the only Institute in India to achieve these feet. (Check Results produced by RACE Institute here).

RACE is the institute to have a Computer Lab with 800 systems, Library with 5000 books and SOLO lab with 200 cabins in all of its branches. RACE training the students in different strategies which benefit them and their result speaks louder and louder than ever before. (Learn more about the facilities we provide in RACE).

RACE Institute’s pioneering efforts include a computer lab with about 700 computers and internet connections, apart from a well-stocked library with over 8000 books, relevant to the competitive exams. SOLO is a distraction-free zone that allows students to practice and prepare without disturbance.