Veranda RACE endeavours to democratise education by providing career-defining competitive exam courses to aspiring students who want to pursue government jobs as their career. We have produced top rankers in various Bank, SSC and TNPSC examinations in India by providing them with access to quality offline and online learning opportunities along with high-quality, engaging study content.

Many cutting-edge technologies have helped to revolutionalise and transform education around the world. But stubborn barriers to quality education content remain, some of them still rooted in stereotypes.

Even under mundane circumstances, people with disabilities are very less likely to access quality education and employment. It has been particularly very tough for the visually impaired, where life has posed considerable issues and impediments to lead a normal life. They solely rely on the use of touch to communicate their needs and access information. The World Health Organisation estimates that around 2.2. billion people globally have a vision impairment. This COVID-19 pandemic has called attention to the importance of making educational content available in more accessible formats such as Braille and audio platforms for the visually impaired. Accessible content and educational materials for the visually impaired are few and far between. 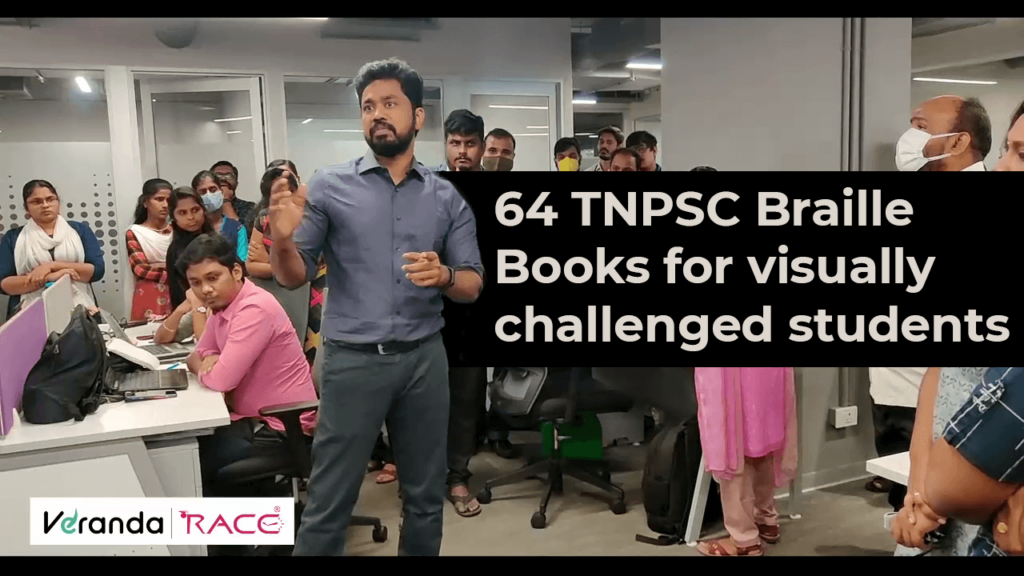 Veranda RACE has undertaken an unparagoned initiative that could open doors for the visually impaired to tackle this problem of accessible educational content and pursue their dreams of attaining a government job. We at Veranda RACE have brought out 64 TNPSC Books in Braille that could be accessed by the visually impaired to help them prepare for the TNPSC competitive examination like any other normal aspirant without any help from other people.

10 visually impaired students from Gnanadharshan Seva Foundation for the Disabled are currently preparing for the imminent TNPSC exams with Veranda RACE, motivated by the success of Ms. Mageshwari who cleared the TNPSC exam with flying colours.

Ms. Mageshwari is a proud alumna of Veranda RACE. The success of Ms. Mageshwari, who is visually challenged in the TNPSC exam, has been a shot in the arm for other students like her. 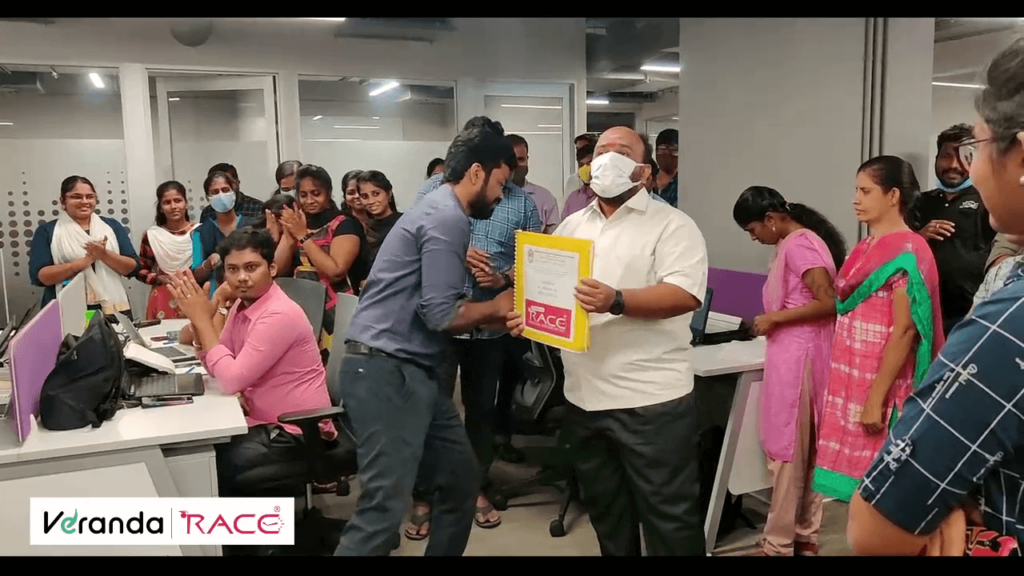 The dearth of TNPSC books in accessible formats such as Braille was an Achilles heel for our dedicated visually challenged students.

To given an example for the readers, according to an information provided by the TNPSC, 552 candidates with visual impairment competed against more than six lakh candidates across the State in the tTNPSC Group II A examination in 2014 to fill 2,846 vacancies in various departments.

So we at Veranda RACE decided to assist the preparation of the inquisitive students by bringing out 64 TNPSC Braille books. This is a first-of-its-kind initiative by Veranda RACE in India to bring TNPSC educational content in Braille format to help visually challenged students. We are proud that we could act as a springboard with this initiative for the dreams of incessant disabled students.

The 64 TNPSC Braille books contain blow-by-blow information and elaborate explanations on topics prepared carefully by our erudite staff compiled from TN SCERT books. The books have the Old Samacheer Kalvi SCERT Book Content as the base and are updated with the New Samacheer Kalvi Book Content. It would help the students to learn from a single source without having to run through different sources.

Mr. Bharat Seeman, the Vertical Head of Veranda RACE, presented the first edition of the 64 TNPSC Braille books to Mr. Sunderasean, the founder of Gnanadharshan Seva Foundation for the Disabled, in a ceremony at our headquarters in Chennai. He also announced that Veranda RACE is planning to make the TNPSC Braille books available at all the branches of Veranda RACE to help visually challenged students access them at all times.

Veranda RACE further has plans to build a separate Braille library especially for competitive exam content featuring all our high-quality, engaging exam content to bolster the preparation of visually challenged students in their journey to achieve a government job.

We really hope that this introduction of 64 TNPSC Braille books will pave the way for a better future for many visually challenged students who aspire to become TNPSC officers.

“No dream from now on will be out of sight for the visually challenged students.”

Those who wish to get instant updates on Social Media Platforms can follow us via the links provided at the end of this page.

Want to crack any TNPSC Exam this year?